B20 Artist Interview with Jessica Caldas

We’ll be sharing a series of interviews with B20 artists during the run of the exhibition, and our thirteenth is from High Springs, Florida-based artist, Jessica Caldas.

Where do you find inspiration for your artistic practice?
Most often I find inspiration from the things happening around me. I’m talking about my lived experience and the lived experiences of others. I’m also talking about current events, popular media, and other facets of our daily lives. It can be easy to feel that all these things are separate from one another, but I’m really intrigued by the ways they connect and intersect, and how that affects our understanding of these experiences, whether they are happening to us or not.

Tell us about your Tired Bodies series, and, more specifically, The Caretaker (Elizabeth), which is featured in B20: Wiregrass Biennial.
I started making Tired Bodies drawings and sculptures in 2018 when I was in the middle of my graduate studies. I had just had a baby and was working part time through grad school to try to stave off additional student loan dept. I was exhausted all the time and felt like I was often failing. Before this time, I’d been like the majority of people I know (specifically Americans) who take a lot of pride in how hard and how much they work and to feel like I wasn’t able to meet my usual demands made me feel like a failure. Ultimately, this just contributed to my also feeling tired all the time. I started to think about how dangerous this mindset is.

I’d previously done work about mental health and how deeply our own thoughts can affect us physically and how unhealthy this all is with several performance pieces. I was already interested in the idea of being more gentle with ourselves but this was the first time I translated directly it into the ways hustle culture and labor can impact us. Tired Bodies, as a response, felt like a way to encapsulate this all while poking a bit of fun at the ideas. To me, the weirdness of them, the ways they are a bit odd and funny, are almost ways of resisting the culture while still acknowledging how we perpetuate and participate in it in our own lives. Since then, the ideas each Tired Body takes on have grown and include concepts around motherhood, gender norms, labor, sexuality, disability, and more.

The Caretaker (Elizabeth) was part of a handful of Tired Bodies made from a specific person’s experiences with some of these ideas. My mother, Elizabeth, has been a caretaker most of her life and not always by choice. Having grown up in a less than ideal household, then having had children at a young age, and then having to take care of her elderly mother as an adult. She is a wonderful caretaker despite her own trauma, but she has often described a lack: a space she feels in her own life of the possibilities that could have been that has been swallowed up by the labor of caretaking. For her, there are paths in her life she could not take because of this role, and for her it can be exhausting and empty. The irony is that now that she is retired and relatively free she has chosen to assist with the care of my daughter. Her freedom in this role, because she chose it wholeheartedly, is palpable.

I appreciate my mother’s feelings about caretaking as a fairly new mother myself. Motherhood and Women’s Labor in general is often diminished, dismissed, and undervalued. This goes doubly and triply for women of color, who are not only more frequently tasked with care within their own homes, but of other’s homes, and of entire communities, and often without the recognition that their white or male counterparts would receive for the same work.

How do materials play a role in the story you are telling through your work?
In general I am responsive to each idea I’m creating around and willing to adapt to new materials to get across the story and experience I’m dealing with. For me, each material can and probably should be very important.

Tired Bodies were a wonderful return to soft sculpture which I had worked with previously but had taken a break from. For the most part I try to source used household linens to create them. These objects of the home connect directly to ideas of labor within the home and, often, women’s labor specifically. Their being used is important because objects carry with them the weight of their history. Additionally, used sheets and linens carry intimacy as well as a bit of weirdness/grossness. All of these facets of material are necessary to building up the weight and concept of Tired Bodies. I use a lot of bricks and cement blocks as well. Their contrast to Tired Bodies‘ softness feels important because the things I am thinking about do heft violence upon us: there is sharpness, heaviness, and weight against our own tired flesh. Additionally, these are also tools of labor, though a bit more public. And certainly the contrast between public and private labor, it’s value, need, and visibility are important to me.

Conceptually I think the largest impact the South has on my work is actually the diversity within my daily interactions. That diversity allows me to function in my work with more empathy and openness than others might be able.

I grew up in the heart of Atlanta in lower income neighborhoods but went to fairly well off public schools with programs that attracted plenty of white students. My family is diverse and my folks did a good job of raising me in diversity as well. Recently, I moved to a rural part of Florida (I still split my time between here and Atlanta) and I have found that I’ve a lot to learn about diversity of place as well. A rural small town is so different from a big city and while I knew this abstractly, coming face to face with it is certainly challenging a lot of assumptions and knowledge I had. Still, the recent revolution in our country and the conversations I have had with extended family and friends that live elsewhere has definitely shown me how valuable and privileged I have been to grow up in the heart of a city like Atlanta, as well as with the kind of immediate circle I am privy to.

How is your work inspired or influenced by larger social justice movements, particularly that of our current events?
I have touched on this a bit already but I’ll expand here. A lot of my work deals with women’s issues but ultimately the issues and experiences I’m confronting are much larger than that. I’m interested in directly talking about experiences that challenge our preconceived notions of lived experience and how these experiences interact with the world at large. That means current events, politics, and social justice movements play a direct role in my work. One issue can’t really be discussed without thinking about many many other issues. I can’t talk about a women’s issue in general without acknowledging that white women’s experiences will always be different than Black or Non-Black POC experiences. I can’t talk about the experience of labor without acknowledging that disability and health are huge factors for how labor manifests in our lives or that class colors our perceptions and understanding of labor as well. All of this matters. For some, it may be exhausting to think about every factor, and I’m certainly not saying every piece can address every issue (nor should every artist feel the need or entitled to address every issue in their work) BUT I can’t make this work without being aware of these things AT THE LEAST. I should be able to speak to these ideas and open to learning more about them from others. I should also be willing to say I’m wrong.

Another important factor for me is sticking to creating work that deals with issues for which I am directly engaged in either as a member of the community or advocate in the community. For example (and this whole statement is super simplified), I worked as a domestic violence advocate for many years and felt that experience was necessary to speak on those issues within past work. I am a survivor of sexual assault as well as an advocate for policy around gender based violence and that is an important factor within the work I create on that topic. I engage with advocacy and activism work in health and immigration and that for me is a prerequisite to making work on those topics. There are also topics that I won’t make work on regardless of anything I do within those communities because they aren’t my stories. It’s complex but necessary to think about if you consider yourself an artist who makes work about social justice.

How did you become interested in installation and sculptural work? What is it about installation that allows you to connect with the audience on a deeper level?
I think that performance work led me to installation based work and the impetus for both remains very much the same. Performances and installation can invite the audience into a space physically. It can overcome them, they can embody the work in a way. Since I’m handling experiences, and in particular experiences that may or may not be foreign to an audience and which contain a multitude of complexities, I find that creating a physical space can open an audience up more than flat work can (sometimes). I am deeply invested in bodily experience through my work and installation (and performance) can often accomplish this.

Is there anything new you are working on that you’d like to share with us?
In addition to developing more work within the Tired Bodies series I’ve two other major bodies of work I am tackling right now. One is about my Puerto Rican family history and the social and political history of the US and Puerto Rico. This work is currently in the research stage and super intense in terms of reading/writing/thinking rather than executing new work. The other is an ongoing series of mixed media drawings/painting that I’ve been working on since the beginning of this year. The series used my toddler as a model and contemplates the anxieties of parenthood and childhood in a world that is rapidly changing and falling apart in many ways. It sounds dreary but the pieces tend to possess a brighter, optimistic attitude despite their anxiety furled dreamscape apocalyptic bent. That is the irresistibility and resilience of childhood at play, I think. 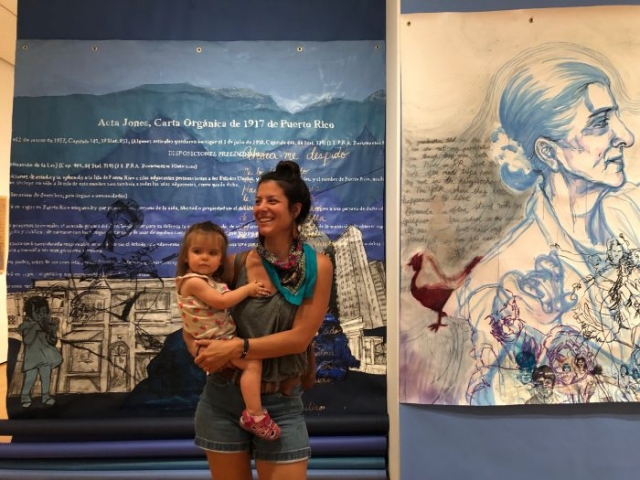 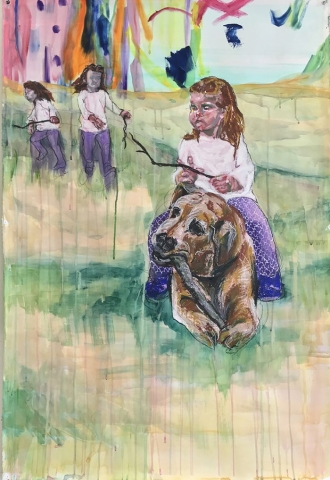 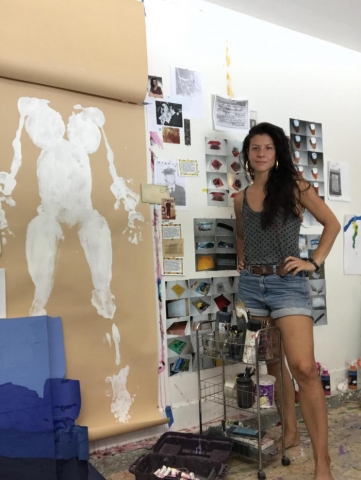 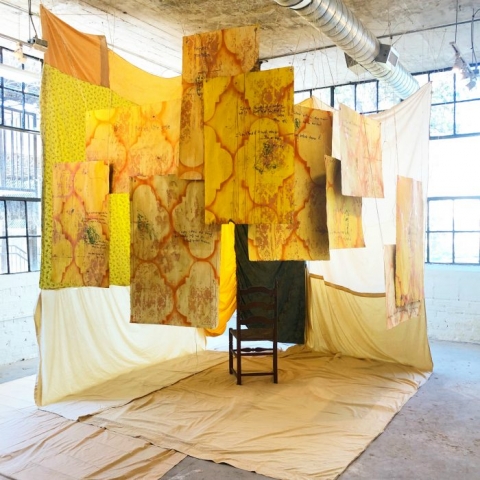 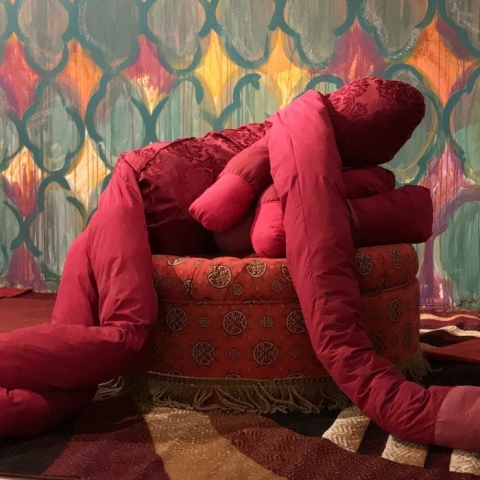 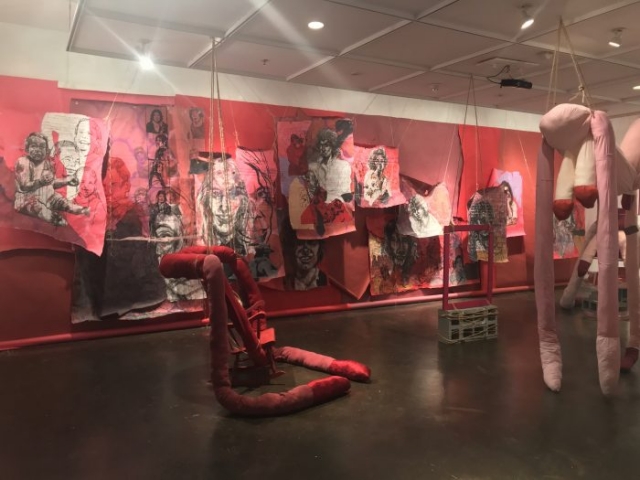 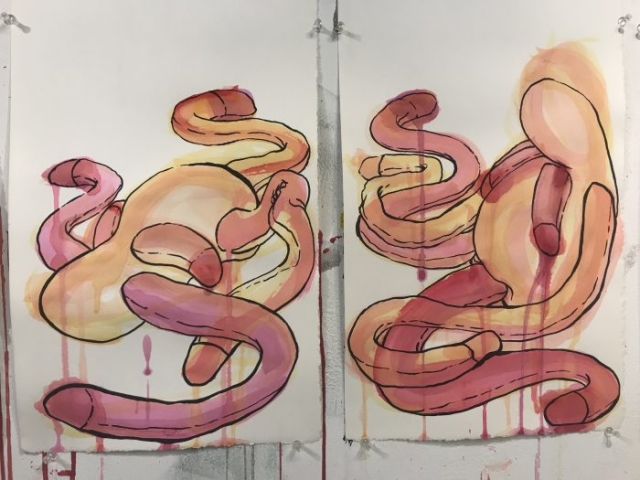 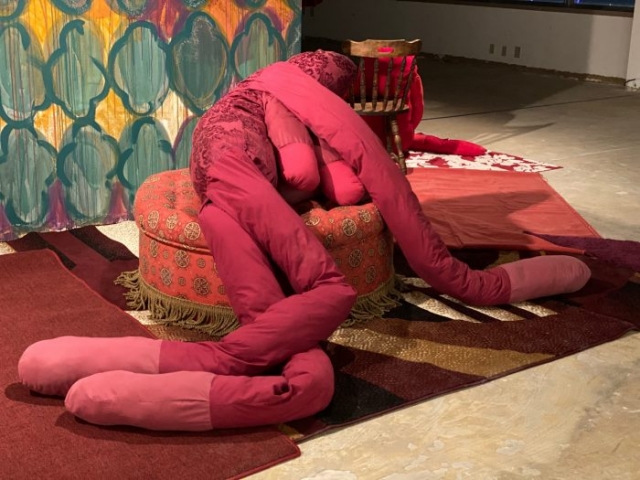