B20 Artist Interview with Jasper Lee

We’ll be sharing a series of interviews with B20 artists during the run of the exhibition, and our eleventh is from Birmingham, Alabama -based artist, Jasper Lee.

Where do you find inspiration for your artistic practice?
I find inspiration in the people around me who are also creating. I’m very inspired and motivated by collaboration. I find that ideas are only improved when it becomes a dialogue with others. I have incorporated all of my friends and family into my art practice in one way or another, whether they are an artist or not. I’ll record them talking or create a scene for them to appear in. I believe that art should have this social element. It shouldn’t always be about a lone creator crafting objects by themselves. That may be a beginning to honing a skill, but I’m inspired when I see it progress from there into a sharing of knowledge and a way to build community.

How important is storytelling to your work? What is your process for telling a story through your videos and moving images?
I like forms of storytelling that explore the inner life…that unfold in a stream of consciousness way. I think the way I form stories with moving images is related to collage. Associating various images with each other and finding where the connections lie or how they add up to create an effect greater than the sum of their parts. My process usually begins with a very simple starting point; never with a complete script or storyline of what’s going to happen. That’s why I identify more as an artist than as a filmmaker or director, because of my focus on process. The process itself is very important to me, on a spiritual, metaphysical level. I am guided during the making of the work, by following little clues here and there.  Incorporating new ideas and objects and places as they come along. In Land Rearranged, for instance, I initially wanted to make something based on the feeling I get from the poems written by my friends and collaborators Kathleen and Matt. I also wanted to document Kathleen’s collection of rocks and found objects. The piece evolved from filming her moving objects around, and also shooting outdoor landscapes that I didn’t think were related at first. But I started connecting the dots and eventually wrote words based on the images, which Kathleen read and this created a very loose narrative out of everything. The story became about these relics extracted from the land and what they symbolize psychologically.

As a musician and visual artist, do these practices inform one another in your work?
Yes, it’s only gotten more intertwined over time! I’ve gone from making music for other people’s films, to making my own films, to making films out of other people’s music (when I make music videos). Music is supreme to me. It has and will outlast any other art form. At its core, it requires no tools or substrate to be made, only your voice. But I’m also interested in how music operates in the world….visualizing how it can influence reality. Not just music, but sound in general. That’s why video is a great medium for me. It allows a way to see how sound and image relate and inform each other.

How did you become interested in video as an artistic process?
From a young age, music videos were a big influence on me creatively. They were always magical, and probably the earliest form of visual art that I saw, even before paintings or any type of more conventional, traditional art. I’ve always been drawn to the creative possibilities within popular media. I grew up drawing a lot and making collage, which I love to do, but over time I became more interested in making something that could convey transformation in real time. Time based art is very different in this aspect from making a static object like a drawing or sculpture. I like to see things move and shift and reveal new things.

How does living and working in the South impact your work?
Living in Alabama, I’m not as aware of or influenced by trends in the so-called art world. I care more about what’s going on down the street, or in that field over there.  I think working here has made me more resilient and dedicated to what I’m doing. It has made me want to examine the roots of the culture here and try to talk about why Southerners act in certain ways. The landscape itself is a big influence. The way the land looks is an indicator of the history of the place and is something I think about a lot and try to represent.

What are the superstitions or folk beliefs you’ve been most excited to learn about through your work?
There’s one thing that particularly fascinated me. Someone said if you break a mirror, put the pieces under running water to wash away bad luck. Water is a healing, cleansing substance, and broken glass is dangerous, and they’re both reflective……that to me is a really captivating riddle-like ritual. I’ve been excited to learn a lot about these types of things from reading a book by Stewart Vyse called “Believing in Magic: The Psychology of Superstition.”  In it he explains “Superstitions are the natural result of several psychological processes, including our human sensitivity to coincidence, a penchant for developing rituals to fill time (to battle nerves, impatience, or both), our efforts to cope with uncertainty,  and the need for control.”

With my work I’m putting forth the idea that superstition persists, and that people live in different realities according to their understanding of and willingness to engage with the world. I think our superstitious nature is like a two-sided coin.  There is a positive side to acknowledging that there are forces outside yourself that you must interact with and offer respect to. There is also the negative side associated with fear of the unknown, which can lead to controlling or destructive behavior towards other people or the environment in an effort to eliminate a perceived danger.

Is there anything new you are working on that you’d like to share with us?
I’m pretty heavily into a music series I’ve been curating for every season this year called Seasonal Séance. The Summer volume came out in June on the label I run called Sweet Wreath. I’ll be putting together an Autumn Equinox volume soon to be released in September. This is a great way to collaborate with a variety of musicians and present something new in lieu of play shows right now. It’s also a way of re-grounding ourselves in what each season feels and sounds like. I’m also working on a video installation about weather, folklore and legal jargon for a solo show at Vinegar Contemporary in Birmingham. This will open on November 6 and I’m making it into a fun multimedia experience for groups of 2, so I hope people will come visit! 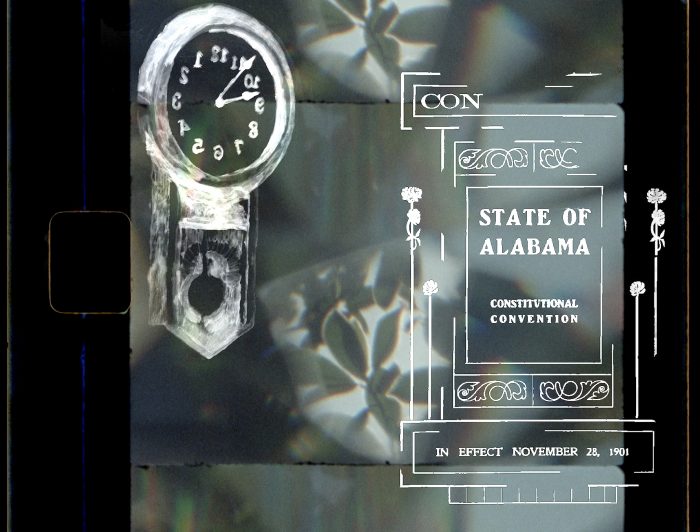